Find all the latest information about Satino by WEPA.

Satino by WEPA flies the flag in London

The Cleaning Show 2021 was held in London from 2 to 4 November: a successful premiere for Satino by WEPA following its UK launch in 2020.

"We'll protect hands even if we can't shake them" was the motto used by Satino to celebrate its impact in the UK at its Cleaning Show 2021 stand.

This was the first trade show for WEPA Professional since the 2019 lockdown and a premiere for Satino by WEPA in the UK.

Around 7,000 visitors from all over Europe attended the fair, and many took the opportunity to experience Satino products live. Ralph Kaufmann, Alasdair Sharp, Monika van Ettinger and Colin Scandle of the WEPA sales team were able to establish new contacts and deepen existing ones.

A strong design and a standout presence

The modern and newly designed Satino stand was an eye-catching addition to the fair, with the new cardboard dispensers also on display for the first time.

Visitors to the show had the chance to get creative by designing their own cardboard dispenser for the chance to win a €100 Amazon voucher each day.

Away from the Satino stand, visitors were able to test out 15 Satino XL hand sanitiser stands at various points throughout the show, including in the entrance area, the aisles, and at official "meeting points".

This ensured Satino was visible throughout the fair, allowing attendees to test out products in real time.

Satino by WEPA’s first outing in the UK was a real success, and also provided taste of what’s to come at Interclean Amsterdam in May 2022, where we look forward to welcoming  many of our business customers once again. 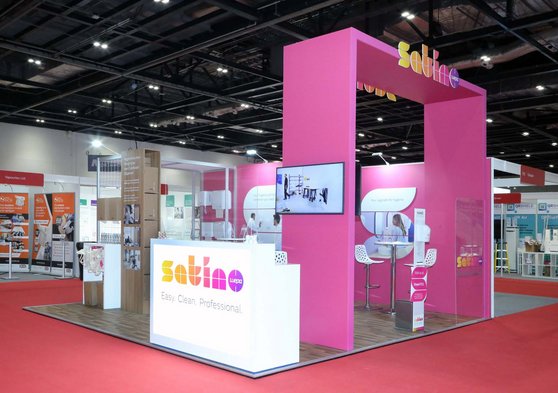 Curious and interested in working together? Our employees will be pleased to assist you on all questions concerning our products. Please contact us - we look forward to hearing from you.